"J" said:
Thanks, You getting any snow? We’re getting some currently.
Click to expand...
Sorry I ain't been able to git back to ye . Been too busy digging out from this crap .

MtnMan said:
Sorry I ain't been able to git back to ye . Been too busy digging out from this crap .
Click to expand...
😂😂😂😂
Snowmageden 😂 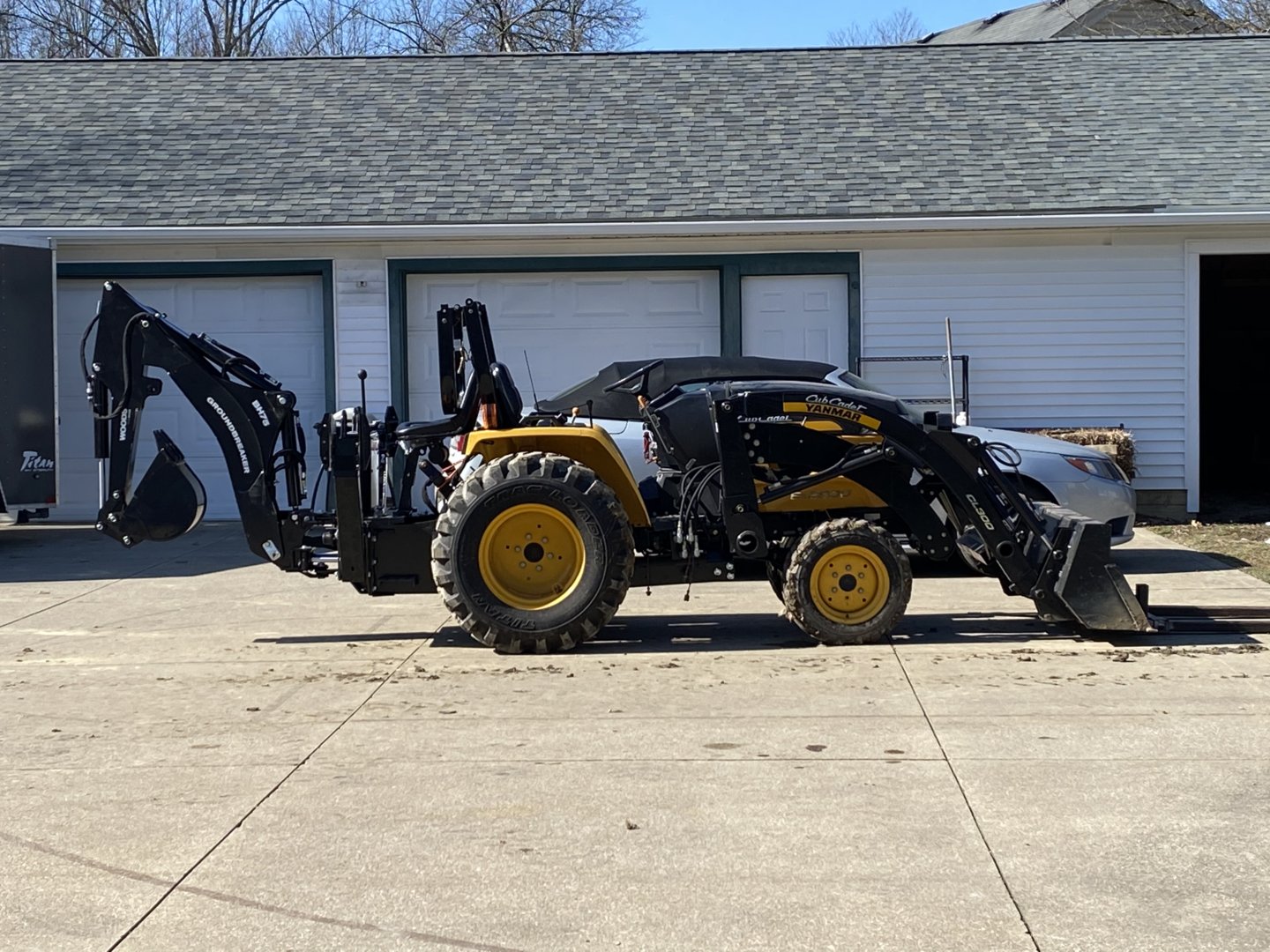 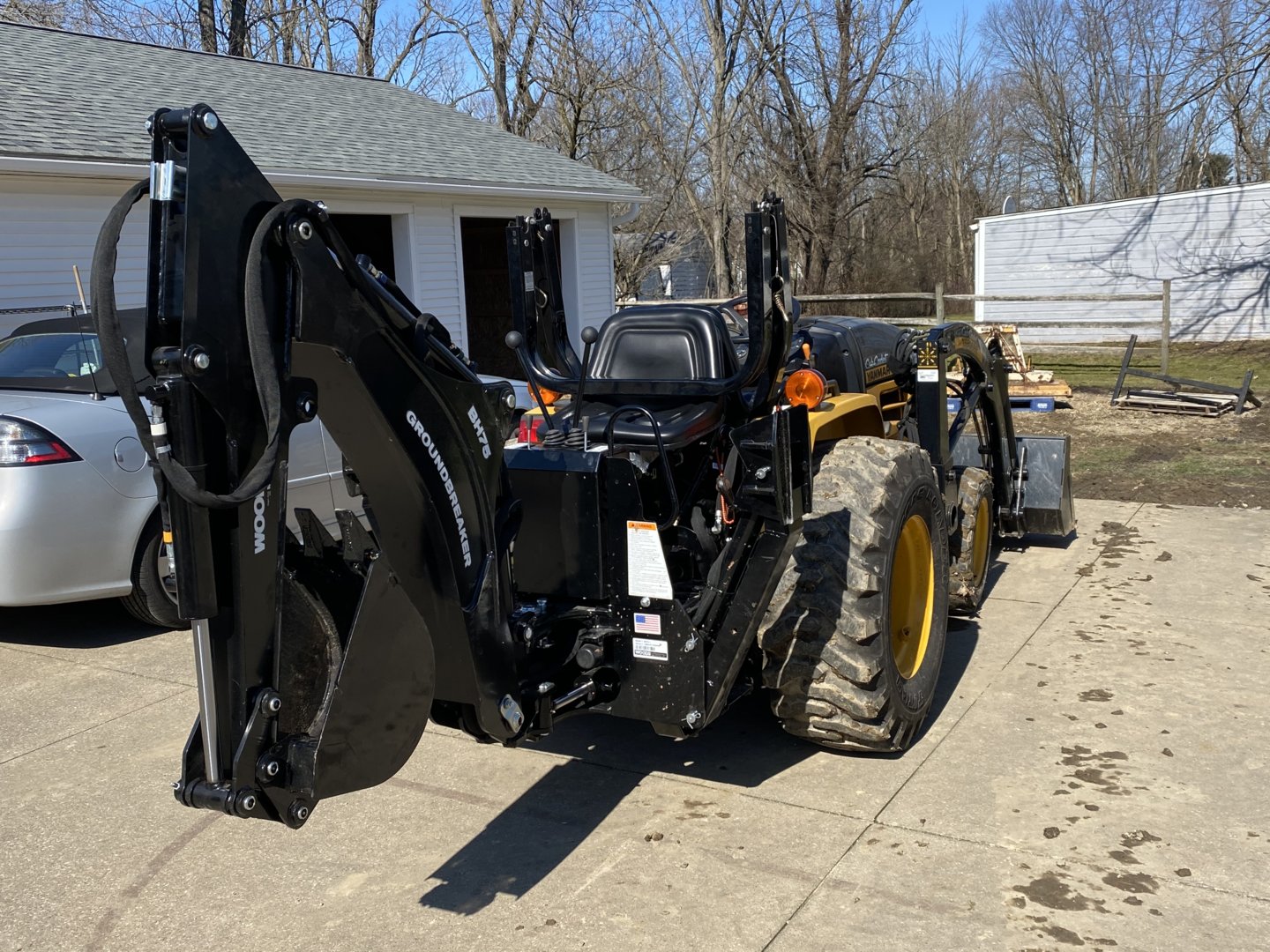 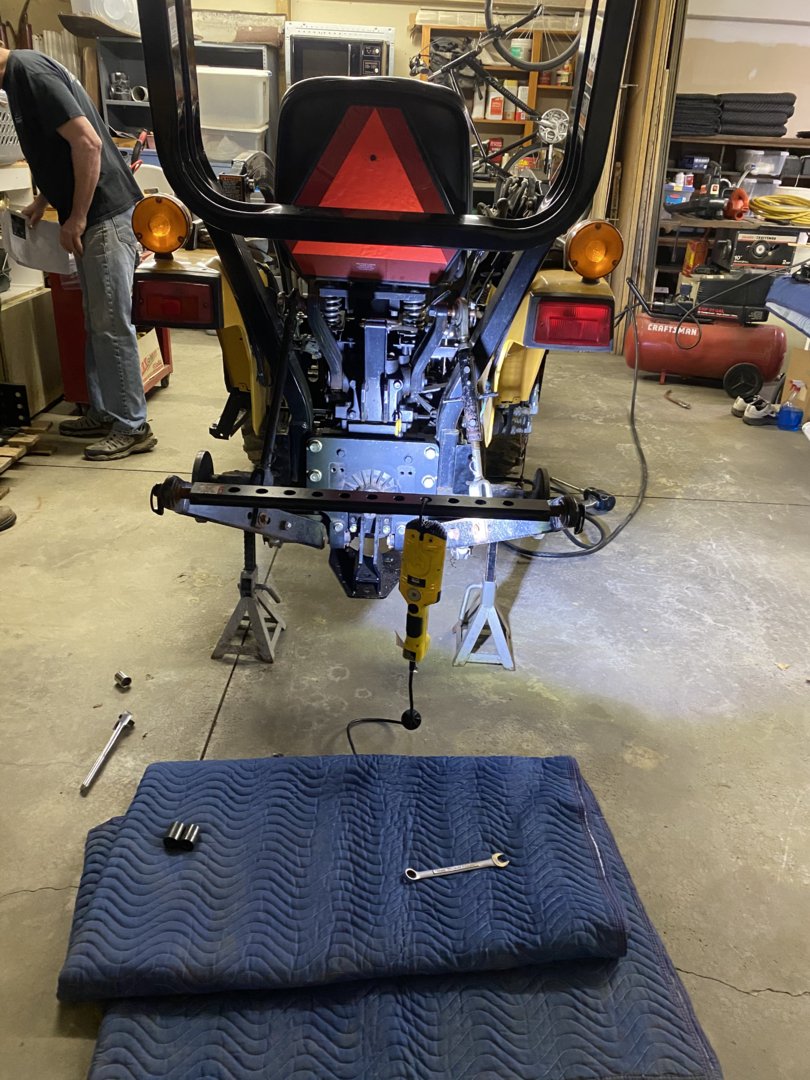 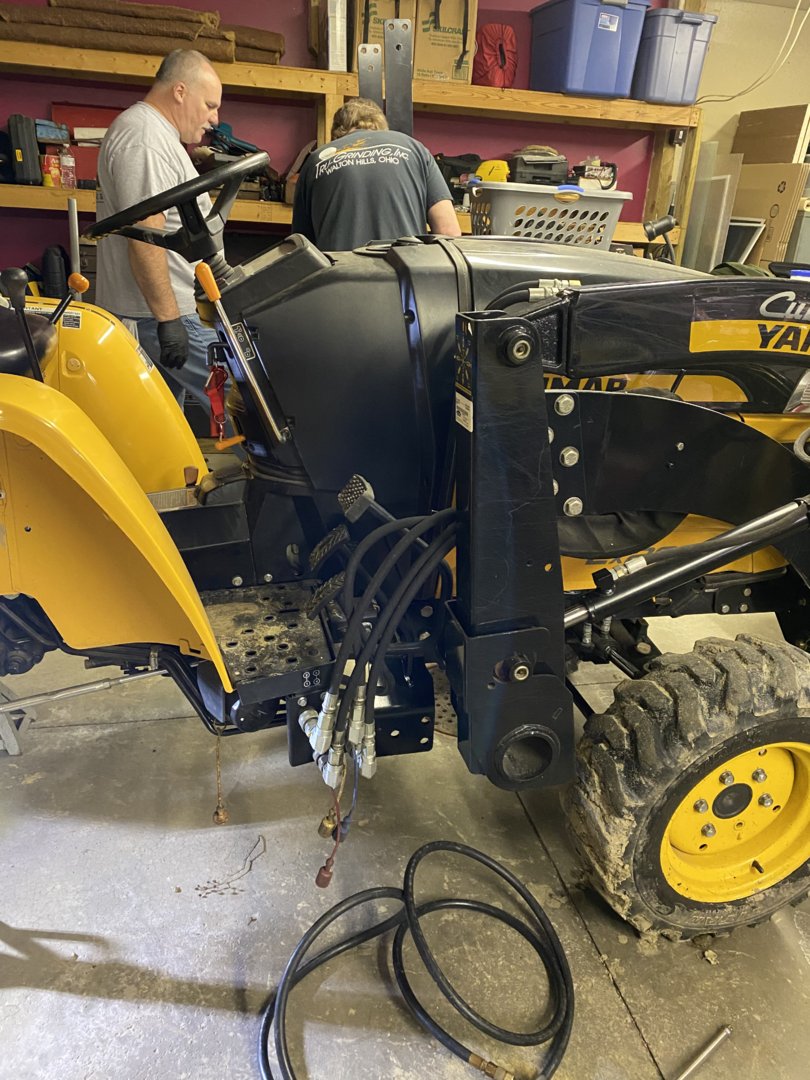 Took a trip back up north too help my buddy Kevin too hook install and hook up a backhoe attachment too his tractor. Our buddy Rick who lives in Boone NC came up as well. Rick sold the tractor and then later on found him this backhoe attachment. We’ve been kicking around dates of coming up too do this but family, life and schedules take time to line up at times.
We’ve loaded up the implements and will load up the tractor tomorrow and then head back down south. Ricks going to use the tractor around his place for a week or so, then he’ll drop it off at my place. Kevin’s coming down later this week, dropping off the implements and then heading to Florida for the week. On his return trip we’ll use the tractor around my place and do some drainage work on the driveway.
After everything is done, Rick and I will return the tractor and implements back up here too Kevin. Should be an interesting next month or so...
One thing I don’t miss up here is this weather 😂😂
Likes: xbowguy, Big_Holla, OhioWhiteTails and 4 others

If you have to go up any hills, back up them.

giles said:
If you have to go up any hills, back up them.

"J" said:
you’d be happy too hear it’s being towed by a 3/4 ton hemi.... 😂
Click to expand...
That space shuttle pulling champion can handle it. Ain’t that heavy.

giles said:
That space shuttle pulling champion can handle it. Ain’t that heavy.
Click to expand...
Oh it’d pull it but Rick wanted too drive, said something about not wanting too be seen in a Toyota 😂
Likes: OhioWhiteTails, Dustinb80 and giles

I don’t blame him. That thing looks like an excited dog with its lipstick hanging out.

Well it’s been about a month now that we’ve had the tractor down here in NC. We’ve gotten a lot accomplished at both Ricks and my place.
Driveway drainage has been cleaned up and in places trenched deeper. Utilities were marked a few days before we started. Gotta say they were accurate in most areas and way the hell off in others 😂
There’s a surprising number of wires running back too our place. Power and fiber optic being the most important. All the other ones aren’t used and seems were found at different times by other folks with a tractor. Found one cable balled up in the creek. Found another in a brush pile we moved. Boggles the mind.
When the driveway was done the trenching around the front and east side of the property commenced. We trenched it deep and wide enough too allow another monsoon too come through without any issues. But you know Mother Nature can prove you wrong.
We did a lot of clearing on the East and south side of the property as well. It was choked out by kudzu and scrub trees with some briars thrown in the mix. Previous owners never managed it and let it get away from them.
We had the property surveyed before we closed on it and they pinned it and marked the area with tape so you could basically see the line from a distance.
We opened up the East and south lines all the way. The west was pretty well open but we did remove a couple gum trees around the shed, just too get rid of the sap it dropped on the shed as well as our vehicles parked by it.
We only had a few days of rain that shut us down. So the weather cooperated for us for what we needed too accomplish. We did have too take off a week to travel north for a funeral of a close friend who passed unexpectedly. But we resumed and knocked it out when we returned.
We worked from 9 to 5 most days and then cracked the beers and had dinner and just relaxed and enjoyed the evening. Kevin left for home Wednesday and I continued on just doing general clean up and moving dirt around. We had plenty of dirt too go around and I used most of it for a backstop for a range I was wanting too put in. I do have one helluva pile of brush too burn up though 😂 I told the wife I’m not sure if I’ll do it gradually or just have a @Hoytmania style fire 😂 you know the kind that the satellites pick up on? 😂
I’ll give it a few weeks to allow it too dry out some more then whittle away at it. NC requires a burn permit, you can do it online and from what I was told it’s just a formality. That way when people see the smoke and call it in they’ll know that it’s someone burning brush. @Clay Showalter probably is dealing with that as well with his new place.
So this has been my last month or so of keeping busy on the home front or as I like too call it in these times, the compound 😂

Lessons learned? First and foremost. Whom ever introduced kudzu too the area, I hope they burn in hell!!!! 😂
That’s some thick, nasty, choke everything within the area pain in the ass invasive vines....
Ground up asphalt is the way too go if you’ve got a long driveway. May not be as nice looking as limestone, but who cares 😂 That stuff packs nice and is easy too spread. Plus it’s cheaper 😂

Most of all, you really know who your friends are when you have too head out of state for a funeral and they continue on while you’re gone. Kevin and Rick bailed me out big time. I owe them a lot. I’ve known them the majority of my adult life, worked with, deployed with, and hung out with most of them years. I’m truly blessed too have them as friends. Who ever is reading this, I hope you have a few people in your life such as these two.
Well that’s enough rambling for the day. Peace out folks!!!
Likes: Big_Holla, Sgt Fury, Clay Showalter and 2 others

Come on J, where's your sense of adventure at?

If you need me to, I guess I could come down there and do it for ya.

Hoytmania said:
Come on J, where's your sense of adventure at?

If you need me to, I guess I could come down there and do it for ya.
Click to expand...
I knew you’d pop in on that part, Steve 😂😂😂

Any spots where the ground asphalt doesn't hold...spray it with diesel good and compact into place. Took care of a major washout like this and its holding great!
Likes: 5Cent

xbowguy said:
Any spots where the ground asphalt doesn't hold...spray it with diesel good and compact into place. Took care of a major washout like this and its holding great!
Click to expand...
Great tip, thanks Rick....

Great update J, and I know the pictures don't show the half of it but it is looking much more open for sure!

We're you familiar with the type of vegetation you would run into down there? I have never heard of most of what you listed and you are a bigger man than I venturing into that southern brush. Between the ivy and the bugs they got down there, ain't happening. I think I would have been stuck doing a controlled burn lol.

Sounds like 2 great buddies in Kevin and Rick, and you realize that. I am happy to hear of the progress and time spent together, be safe my friend!
Likes: "J"

xbowguy said:
Any spots where the ground asphalt doesn't hold...spray it with diesel good and compact into place. Took care of a major washout like this and its holding great!
Click to expand...
No shit? That's a great truck right there Rick, any idea why it works?

5Cent said:
No shit? That's a great truck right there Rick, any idea why it works?
Click to expand...
Petroleum. Had a guy at the gravel place tell me. We made a sidewalk out of it and it's pretty darn nice. Used the turf tires on my rider to compact after spraying. 6' x 30' area took about 15 gallons but it's worth it! Even sealed it like a drive when done. NO MORE WASHOUT!

That's what I was thinking, it helped loosen up the tar in the mix and then allowed it to be compacted before evaporating.

5Cent said:
That's what I was thinking, it helped loosen up the tar in the mix and then allowed it to be compacted before evaporating.
Click to expand...
Hillbilly Asphalt....LOL
Likes: 5Cent
C

Lol sounds like lots of work getting done, yea you are supposed to get a burn permit, I know you can get one from the fire department but never have.
Likes: 5Cent

Clay Showalter said:
Lol sounds like lots of work getting done, yea you are supposed to get a burn permit, I know you can get one from the fire department but never have.
Click to expand...
Clay how much did you burn? I’m pretty far from anyone so I think I’d be safe 😂
Likes: 5Cent
You must log in or register to reply here.
Share: Facebook Twitter Google+ Reddit Pinterest Tumblr WhatsApp Email Link